• Mimimi Manga Spin-off Volume 2 has been released! You can buy the volume at here.

This is the fifth volume of Jaku-chara Tomozaki-kun light novel.

Tomozaki never expected he would be mentoring Tama-chan in the ways of the normie-especially not when she turns out to have an A-tier character to begin with. How can he help her? CAN he help her...? 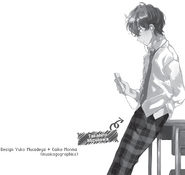